Brunch at the Empire Grill

We live in Ottawa's south end, not too far from the airport, and the only breakfast/brunch place close by that we know of is Cora's. I never really liked Cora's because we almost always have to wait to be seated and the food is frankly not worth it. Well, last time we went, we also had to wait an hour to get our orders because of a kitchen problem and we decided that this was it for Cora's.

We thought "the hell with expenses, let's go to the market and get some good brunch", thinking that the trade-off for quality would be a lighter purse.

Well, we were wrong. Not only is the Empire Grill offering a great brunch menu, it is also no more expensive than Cora's! 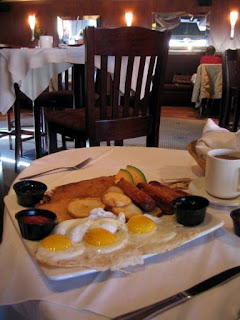 Furthermore, the place is much nicer and the staff friendlier. May had "The Empire" (left) which is way too much food for one person. I had the eggs florentine (below right).

The hollandaise sauce is unctuous and satisfying. The plates are full and appetizing.

I am not a coffee drinker 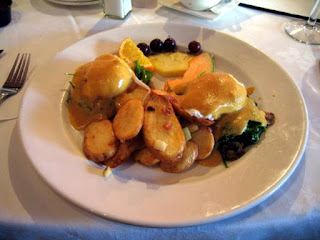 And you know what? Don't waste your time with Zack's which is just a few steps away (unless you go for the Diners ambience only); it is not cheaper and certainly not as good.
For a reference about prices: Eggs Florentine at Empire $10, Zack's $9.99 and Cora's $10 (if I remember correctly). Coffee is $2.75 at Empire, $1.99 at Zack's and whatever at Cora's (it is that bad).

Now, if they could only open an outlet in Hunt Club!