Perspectives at the Brookstreet Hotel

It is our third time at Perspectives. The first time, we were there as part of a new year's eve package. We had heard so many good things about Blackie's food that our expectations were way high. We were totally underwhelmed; some of the dishes tasted wrong (seared foie gras with a very unpleasant aftertaste) and the rest was just not up to our hopes.
However, that was a special event and it might have caused some troubles in the kitchen. We felt that Perspectives deserved a second chance.

So we went back. Again, not impressed by the food. Don't get us wrong; the ingredients were good and the chefs knew how to use them well. It just was not the memorable experience that the price being asked would call for.

But, again, with all the awards and rave reviews that Perspectives got, both from peers AND from Internet reviewers, we just had to go back. We must have been wrong. Maybe we had been hitting the same less experienced sous-chef on those two nights. There are so few great tables in Ottawa, we longed to be amazed!

We were first presented with the amuse bouche: seared tuna on mango chutney. I cannot discern any significant taste. My bouche was not amused. May found it chewy.

For starters, I had the Big eye tuna tartare with caramelized banana lady finger and preserved black bean (left). I have to say that this is the highlight of the meal for me; the mix of flavors is fresh and inventive. 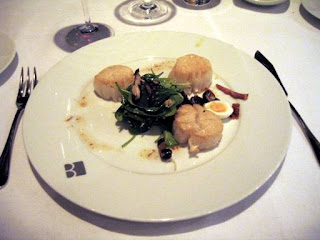 May's Digby ocean scallops with baby spinach (right), shiitake mushroom and soya truffle emulsion were cooked just right. However the various elements ate sequentially and what appeared to be little consideration as to integration of tastes other than how it looked on the plate (very nice by the way; Perspectives' dishes are all extremely well presented)

Next was the rack of veal from Charlevoix with ginger snap crust, foie gras agnolotti and a black currant "tang" (left), and potato wrapped venison loin with Azuki beans, sweet pea and

shallot pulse (right). May's veal was tasty, if a bit overcooked (she was not asked for cooking temperature). My venison was cooked just right but I must avoid mixing with the surrounding ingredients which completely overpowers its taste instead of adding layers to it. 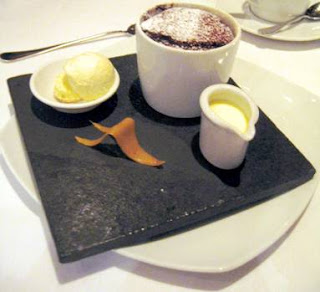 We closed the evening with the Valrhona chocolate soufflé (left) which we both found very good. To be noted; May thought that the green tea she was served was excellent. A bit sad that this would be the memorable part of her meal.


So, all and all... The food is not bad, certainly in Ottawa's top 10. However, not even close to be in North America's top 100 and this meal was not an amazing culinary moment for either of us. If we were to travel to Kanata's industrial park and shell out almost $180, we want it to be something to be remembered.

For us... we are done with Perspectives, we gave it a fair chance but now, three strikes and you're out!

Our bill came to $178.10, which included two glasses of wine and a shared dessert.
Perspectives
525 Legget Drive
http://www.brookstreethotel.com/dining/dining_perspectives_restaurants.htm
Posted by JC at 6:44 PM