Friends of ours recommended Stoneface Dolly's so we decided to check it out.

For starter, we had the Red Thai Soup. Very flavourful, rich taste. We liked it. 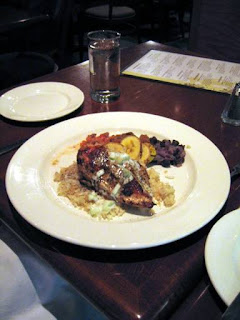 May had the Jerk Chicken (left) and I had the Veal "Birds" (Ground veal wrapped in prosciutto in a portobello and marsala cream sauce).

May's chicken was overcooked, which made it quite dry.


Our friend Cheez was with us and complained that his rice was a bit crispy. May acquiesced. I asked to sample it as I thought that they may both be missing the point of al-dente. However, that was not the case; the rice was clearly undercooked (some grains would break under the tooth).

NDLR: May reminds me that I should have trusted her judgment in the first place. Ok, ok, you were right! ;-)


My veal birds (right) were better but we're not talking fancy food here. I would say it tasted like something served at a friend's house who is just starting to dabble with cooking... it is hit and miss.


Overall, I would say that Stoneface Dolly's gets a 'fair' grade. The food is too uneven to make it an hangout place for us. Unless you really want to eat on Preston street, I would skip it an go directly to Flying Piggy's further south on Bank for truly fresh pasta with a wider range of taste at comparable prices (for half portions).