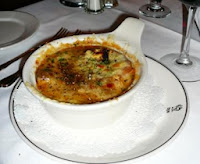 As you might know, Hong Kong is known for its seafood. However, it is definitely lacking on the red meat department. So, May came back with a craving for a big slab of steak and a good glass of red.

About 7 or so years ago, we had gone to Hy's with a few friends and I had been impressed by the plush decor and their sautéed mushrooms. And I had heard that they had just reopened after closing for renovations. So we decided to check the new Hy's out. 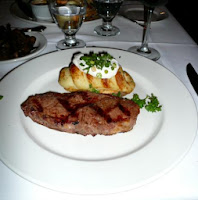 The menu is the typical steakhouse fare of mostly steak, some seafood, a variety of salad (made table side). May and I shared most of our dishes, starting with a French onion soup which was fine. The 10oz New-York strip was cooked right but wasn't especially flavorful. There are much better prepared steaks being served elsewhere in Ottawa (Vardy at the Whalesbone for example).

Also, I don't know if my memory is playing tricks on me but I seem to recall the mushrooms being much better then than what we were served on this visit. 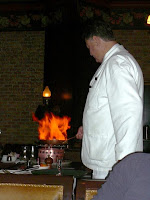 I found them to be lacking flavor and a bit undercooked.
Lots of suits and gray hair surround us in the dining room. I was told that this is (used to be?) the hang out place of the bureaucrats and political types. No Stephen Harper in sight though... 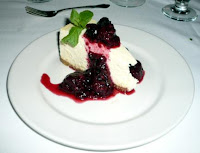 The meal ended with somewhat decent cheese cake. I can't say it was a memorable dining moment for us. Considering that, for the three of us (myself, May and Cheez), the total came to $353.73 for an average meal, I doubt we will return to Hy's anytime soon.

I would suggest that unless you want to offer a smoke and mirror show to some out-of-town business partner who can't really tell the difference between Kobe and tenderized beef, you should save your money and head for the Baccara, Beckta or some other finer restaurants...