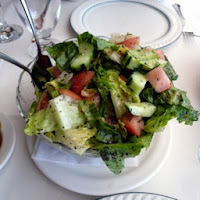 We went for a Montreal weekend. On the Friday night, we decided the check out La Sirene de la Mer, which is conveniently located at about a 5-10 minutes drive from where my mother lives, which is why we went.

I do not want to spend too much time on this place as it was mainly cheap food, badly prepared when it could have been much more. I do not believe that good food needs to be served in a posh surrounding. I do not believe it needs to be served on expensive plates. But it needs to be prepared with care, made with ingredients sourced with pride and served with some passion.
None of that at La Sirene de la Mer. The server came to wait next to our table while May was still looking at the menu. I had to tell him that we needed more time.
The Lebanese salad (right) provided us with little in term of taste, mostly due to sad veggies. 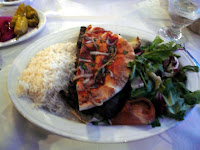 I had beef tenderloin kebab which were very 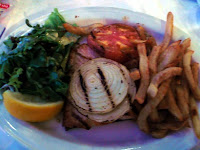 tender. However, that is because it was served blue-to-rare when when I asked for medium-rare (I like my meat rare but I wanted to share with May). My wife's salmon was so overcooked as to be inedible. 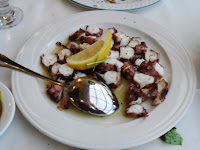 The only thing that we enjoyed was the octopus: it was barbecued to a light crisp and had a nice smoky taste. Unfortunately, we had ordered the calamari...


The place was very busy with people (unsurprisingly for a Lebanese restaurant, with Lebanese people) so, the place obviously has its fans...

For us, we swore never to go back again...