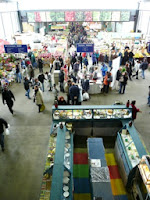 Montreal still. We were on a mission to get truffle oil as I used all of our last bottle while May was in Hong Kong. My official excuse is that I was testing it in combination with steak "a la Vardy" (I think it is his secret ingredient... he puts it in many of his dishes). Anyhow, we went to Jean-Talon market to get the oil as well as getting a little bit of much needed Spring vibes. 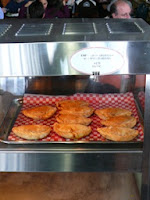 The place was packed with people. We sampled some most excellent tomatoes and pineapple. We munched on some of the multi-ethnic food sold in the various stalls.

It really is a nice place to spend an afternoon planning the evening's meal. I would suggest a trip to the Jean-Talon market to any Ottawa foodie out there... Easy access from Métro Jean-Talon. 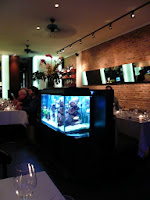 Now, on that very same day, we went to Area on Amherst for supper. It was our first time ever there. That was Saturday April 7th. We learned this week that Area closed its doors on that very night.

I will come back to the closure later... food first.
The food was great. There were three of us; myself, my mother and May (my wife). We did not want to go for the sampling menu as we were warned that we would have to budget 4 hours of dining and wanted to avoid going to bed with a full stomach. We ended up spending 3 hours there nonetheless so, so much for that!

We were first served an amuse-bouche of walnut crusted foie-gras bites with a wild-berry reduction (right). Quite good.

To get as much variety as we could, we each had an appetizer that we shared. 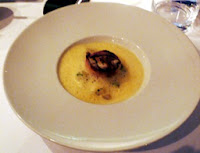 Pétoncle U-10 poêlé : Artichaut au vin blanc, sel de safran, purée de céleri boule et jus de céleri branche
(If you are a foodie, it's time you learn French... you're on your own now!)
$13 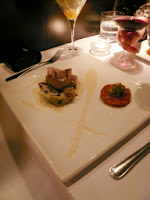 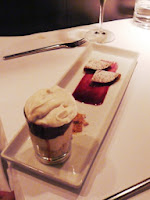 Dessert is always hit or miss in high-end restaurants as far as I am concerned: it is an art different from the main course, requiring its own set of skills. It seems that many chefs produce desserts that are just not up to par with the quality of what precedes them. No worries at Area. The almond crumble deconstructed (left) was to die for. Your palate is first titillated with the whipped cream, teased when you reach the berries, satisfied when you dig in the mascarpone and surprised with the final crunch. Nam!

We truly enjoyed our time there and hoped that we could come back some time...

As we now know, that was not meant to be.

The executive chef/owner Ian Perreault is now manning the kitchen at Halte Urbaine and said that he did not intend to open a new venue for the foreseeable future.

Here is some of what the Montreal Gazette of April 11, 2007 had to say about the unfortunate event: "Yet of the $750,000 the restaurant was grossing annually, Perreault was pocketing only 3 to 4 per cent, compared to a healthy 8 to 11 per cent. 'The average bill at the restaurant was $71 per customer,' he says, 'which meant that when the restaurant was full, I was pulling in $4,000 a night but only $150 after expenses, and even less than that if a glass were broken or a veal chop was overcooked. I hadn't drawn a salary in three years and ended up cashing in my RRSPs to pay my employees.'"

Now, this is not the first time for Ian: he went through two other restaurant closure before. Provided that the size of his restaurant (40 seats) was not so atypical and that it seemed to be reasonnably full, I would question M. Perreault's abilities as a manager. Maybe he should stick to the chef-ing and partner with someone with some business background for management. Hey, maybe someone with an MBA from Queen's University? (Ian, if interested, my phone number is (613) 736.... :-)

But seriously, after Les Chevres', Anise's, and now Area's closure, it does seem like the Montreal high-end restaurant business is tightenning up.
Through this, I believe that Ian should see an opportunity for rebirth and should come back in a few years with a different formula. Montreal would likely be ready for a high-end french "tapas" style such as Joel Robuchon's L'Atelier, where a younger crowd would gather around a concept of "great food on the go".

In any case, we wish Ian Perreault and his team the absolute best and we thank them for a wonderful and memorable evening. 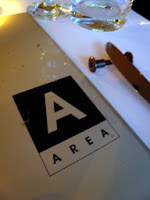