Ottawa: Moving Cheez to Westboro, Beer & Schnitzel, The Table and a chat with Petit Bill's owner

April21st and 22nd was a Westboro weekend for us; our friend Cheez was moving to his new abode (The Currents condo, corner of Holland and Wellington) and I spent Saturday helping him move. 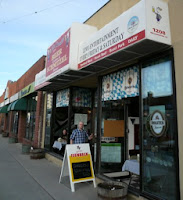 After a tiresome day (the elevator was out of order at his old apartment complex), we decided to try JIJ's Beer Garden And Schnitzel House. The place is playfully decorated in the beer hall tradition. I was secretly hoping for sauerkraut et sausages but didn't find it on the menu (I might have missed it).

There was four of us, we shared an appetizer platter (left) which was filling but not particularly interesting. I had the Jager Schnitzel (right) which was not all that great either. 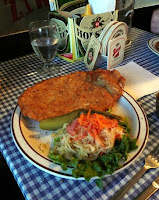 However, May schnitzel was much better 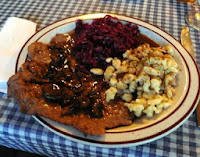 (right, I think it was a hunter schnitzel).

All- in-all, I prefer the schnitzels at New Dubrovnik. However, New Dub is much pricier and a bit stuffier.

Plus, the owner of JIJ's Beer Garden And Schnitzel House seems very keen on the German culture promotion and enthusiastically invited us to get tickets to his "summer Oktoberfest" party. I would say that we would go back for the food but certainly for the ambiance and live music... maybe this coming fall. 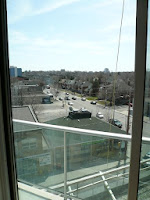 By the way, here's the view from Cheez's new place

On the Sunday, we decided to keep exploring the Westboro surroundings to see how it has changed since we had last been there. Well, changed it has quite a bit; more condo developments, lots of bakeries, just more people overall. I find that it feels more like a vibrant city than the rest of Ottawa.

We had brunch at 'The Table' (corner of Holland and Wellington). It is a buffet vegetarian restaurant. Quite pricey for a whole lot of... veggies.
The food was all very fresh. However, nothing in there to get us off meat. Seems to me that after a while, the tastes just blend into what accounts to the vegetarian gastronomical equivalent of brown. One sure feels good about oneself after a vegetarian meal though...

During our exploration, we noticed a new restaurant called 'Petit Bill' and as we started looking at the menu, the owner, Terry, came out and started chatting with us. Turns out Bill is his father and that Petit Bill just openned a week earlier. He gave us the grand tour. The layout didn't really change since Juniper moved-out. The menu looks interesting and we promised Terry we'd try his restaurant out soon (scheduled for Friday the 27th)
Posted by JC at 8:40 PM

Great blog, guys. But I have one nitpicky comment to make:
Those of us who live in the 'hood tend to get a bit miffed when our strip is referred to as "Westboro". Westboro actually starts further west, at Island Park. The neighbourhood you've been talking about is actually called Wellington West.

Point taken girlwiththesuper8, we'll be careful next time. You have to forgive us, we're just food tourists!