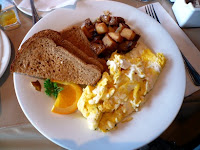 We went to Von's Bistro for brunch today.
May had a 3 cheese omelet which was pretty good (right, $8.75), I had eggs florentine (left, $7.95) with fresh spinash. The eggs and spinash were very good. I thought the hollandaise was so so and that there was something missing to bring the ensemble together. Some nice brie would have done it... 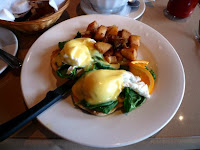