For our second night in Chicago, we had booked a spot at Charlie Trotter's. Just a short 'El' ride away and we were there.

As for Alinea, it seemed to me that the wait staff is much less knowledgeable about food than in the other cities we have visited for an establishment of this reputation. The dishes were described quickly and any questions would result in a blank stare back. 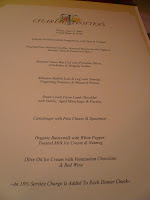 The food itself, was very, very good. We both had the Grand Menu but here are both, to satisfy your curiosity: 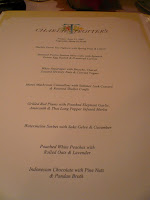 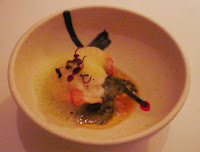 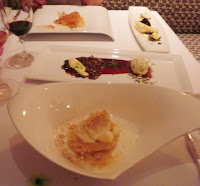 As we were wrapping up the evening, we discussed the comparative merits of Trotter's VS Alinea. We found the ambiance at Trotter's much more relaxed and the food less showy. In terms of feast for the palate, I would say that Trotter might be a little bit less of a risk taker but on that night, I was very glad for him being so. I think that Alinea drew the line for me; I love food as a dining experience, however, I do not care as much when it is an experiment. I guess that's what was bugging me most about Alinea; the feeling of somewhat being in a food lab; cold and distant, while Trotter was convivial and homey. 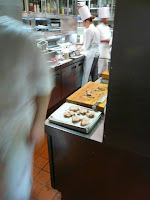 This all sank in as we were going out; we stopped for a second at the kitchen entrance and the 'maitre d' asked us "Would you like a tour?". That sealed it; those guys know people like us; we love everything about food; how it looks, how it smells, how it tastes and how it's made. The Trotter's staff was more than willing to show us around and even confided "You do not have to be great to be work here, but you have to be passionate." I thought this candid affirmation was very reflective of our evening; passionate food in a non-pretentious environment. 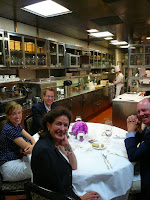 For an extra $100 per person, your party can dine in the kitchen where the chef will design a custom menu. That night, a family from Quebec were enjoying this prime spot (I overheard the unmistakable accent and gave them a 'Bonsoir" that immediately started a discussion about food). Made me wish we had known before and could have dined with them to share stories of carpaccio, fresh Torro Tuna, foie gras and other heavenly food products. We left Charlie with a smile on our faces. 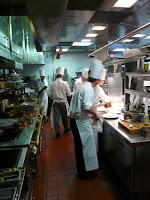