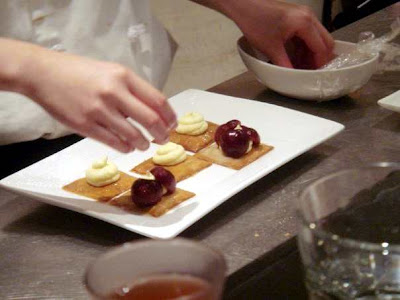 (May is in Hong Kong, having such a hard time!)

My cousins Holly & Elaine heard about this dessert bar called Sift and wanted to try it out... so being tempted by chocolates and creams and all things sweet, I went along merrily. To my surprise, there was still a line waiting outside at 10:15pm. After a bit of a wait, we were able to secure 3 seats at the dessert bar, which I actually prefer to being seated at a table, as we were able to watch our desserts being prepared. After much deliberation, we decided on the sift chocolate cake, the chocolate strawberry pavlova, and the cherry napolitan. 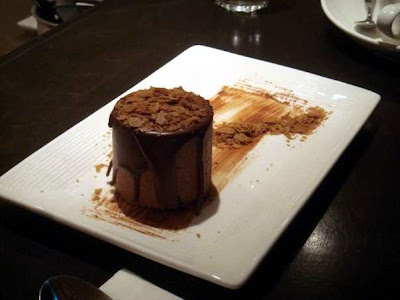 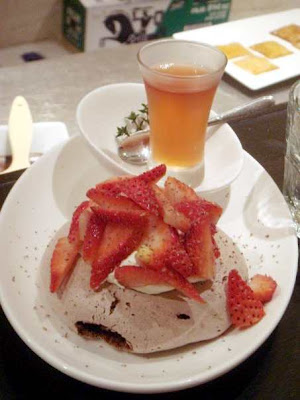 The chocolate strawberry pavlova (Holly's favourite) was paired with a champagne(?) jelly, and they complemented each other nicely. 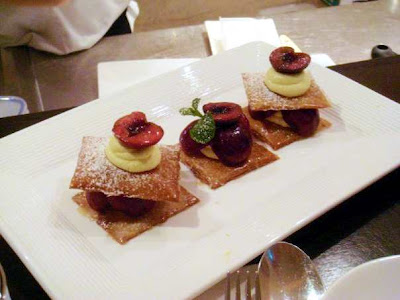 The cherry napolitan truly melted in our mouths, and I believe the cherries were enhanced by some liqueur. I wonder if it'd be better to use puff pastry though... as pretty as it looked, it was rather awkward to eat.

I think of the three desserts, I like the Sift Chocolate Cake the most.

Not much to complain about the dessert, but I think their service could use some help. Like I had mentioned earlier, it was neat to be seated at the dessert bar, being able to watch the chef work her magic. However, not once did she look up and make eye contact with anybody - nor did I notice her smile at all. I guess that is to discourage "nosey" foodies from asking too many questions.

Personally, I think she played it a tad too cool... Also, I noticed that instead of placing our plates in front of us, the waiters tend to slide the plates towards us. When they are charging HK$70 - $90 for each dessert, plus any dessert wine or coffee on top of that, yes I do expect a certain level of service as well. When one is trained by a Michelin starred chef, (as per the chef/owner of Sift) it is not enough to only learn the culinary skills.