Princess Cruise on the Mexican Riviera

Leveraging our very high Canadian dollar (relative to the the USD anyway), we booked a Mexican riviera cruise, leaving San Diego on January 20th and returning Januarty 27th. We then tacked-on 2 days in San Diego.

I will cover the cruise, ports, and San Diego et separate entries.

So, here's our ship, the Dawn Princess,

We actually sailed on its sister ship, the Sea Princess, about 10 years ago. We loved the food on board back then and we were anxious to see whether it would match our recollections. 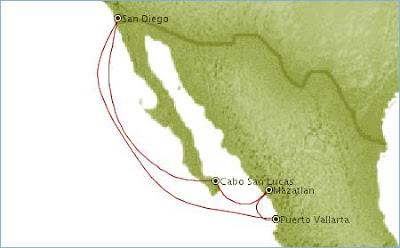 Before I detail the food, here's a few shots of the inside of the ship. 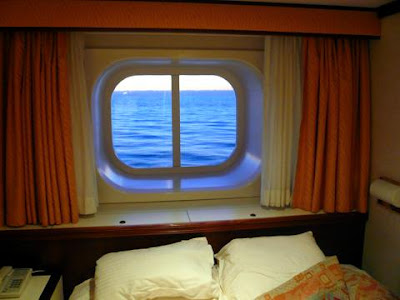 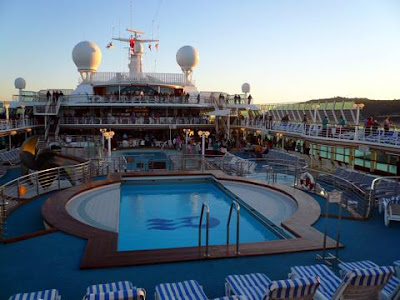 The atrium, right in the middle of the ship. We be there quite often as, unfortunately, the outside temperature turned-out to be way colder than we would have liked (about 12-15 degrees). 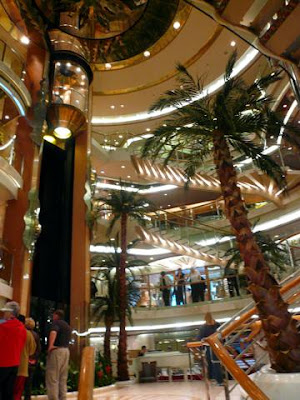 So, how about the food now? This was our 5th cruise and the second with Princess. We cruised on Princess, Norwegian, Royal Caribean, and Celebrity. Onboard cruise ships, there is basically two dining/food experience; the sit-in, more formal dining experience, and the buffet/burger joint type experience. In both cases, they are all you can eat. Yes, if you have lobster one night in the dining room, you can ask for a second order. Or ask for 3 desserts if you can handle all that sugar. It used to be that the only formal dining option was a set time dining; there would be an early seating and a late seating arrangement where you are assigned. I guess people complained and wanted Denny's type service where you can eat whenever so cruise lines (including Princess) now have dining rooms with no set time as an additional practice.

I do not know whether it is a result of the freestyle dining, or because there had been some cases of Norwalk on the previous cruise, or because Princess' food preparation went down the drain, or because the kitchen staff was clueless, or whatever it may be... but the food was, overall, not very good. We were so disapointed. May thinks the explaination is that, 10 years ago, it was our first cruise and we had no expectations. However, I do not believe so; the reason being that one thing that was still as good as I remembered are the made to order Italian-style pizzas in the La Scala pizzeria. Still every bit as good as I remembered. But, in the dining room, let's see:

- service went down; servers used to bring the dishes all together (as it should be done). Now, it was a mix of appetizers, soups, desserts, whatever.

- they could not get any steak, ANY steak, cooked to the right temperature. I take my steak rare, May likes it medium-rare. I got mine medium, she got her's well done. I had her eat mine and I nibbled of the overcooked carcass. The next time, I asked for mine 'blue' and for May's to be rare. No friggin go! Mine came up medium! I had to return it and they finally got the message. I know they are cooking for 300, however, that didn't seem to be a problem before.

- On the first night, May had chicken pasta; they were swimming in a quarter inch of water, the chicken was sliced too thin, they overcooked it.

We had a few better meals but overall, it was not an experience I would like to reproduce. We had better food (Mexican) on shore.

Here are a few menu samples (it all sounds fine... it's just rendition that was sub-par): 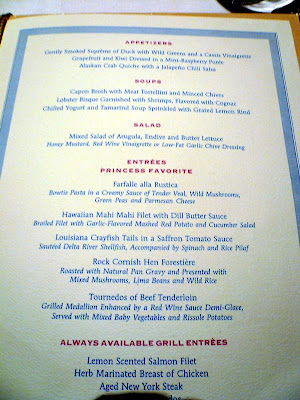 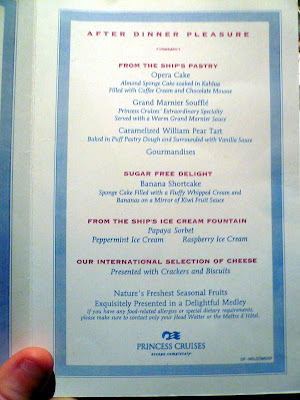 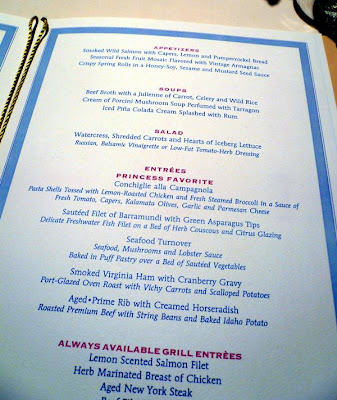 Watery, mostly bland, the tomatoes are not fresh as the chef himself pointed-out in a demonstration (he said using canned tomatoes was the only way to get consistent results) 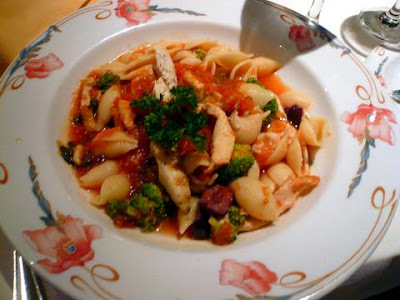 Seafood Turnover; ya, that's it, turn it over so you don't have to look at it. Botched presentation. Does it absolutely need to taste like canned food? 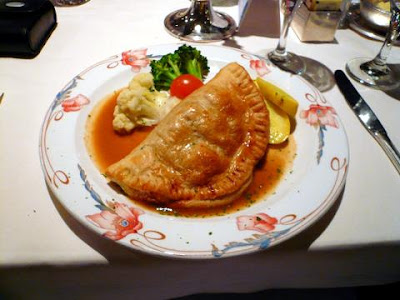 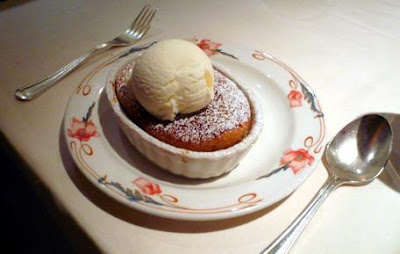 The Horizon Court where buffets were served. It had its good days; one morning, we had eggs bennedict which were appropriately runny. Funnily enough, the next day, eggs florentine were hard! 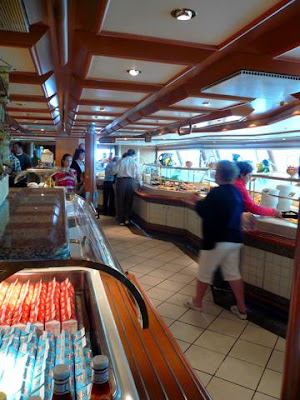 Pizza was still very good, as we remembered. 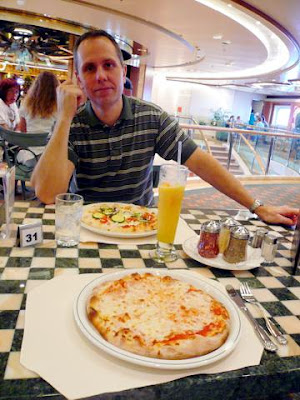 Should this discourage you from going on a cruise if you are a foodie? No. But, please do advance research on the Web. Food quality sometimes varies more between ships and itinararies tahn between cruise lines. Obviously, if you splurge on a Crystal or Radisson cruise, food should not be an issue...
Posted by JC at 11:01 PM