Here's the shameful truth: I'm Chinese but I hate dim sum.
Dim Sum is generally greasy. All the dumplings tend to taste rather the same, no matter the filling. The only reason I go is to be with my family, because they seem to enjoy it.

I told JC he's treating my parents for dim sum (even though he is an ocean away... but ah - brownie points from the in laws... priceless!) JC agreed but with one stipulation. He refused adamantly to pay for crappy dim sum. So after some research, I settled on T'ang Court at the Langham Hotel in Tsim Sha Tsui.

T'ang Court is decorated in red and gold tones. It is elegant but not stifling. It has a rather small dim sum menu (maybe 15 to 18 items), averaging HK$40 per plate. I am happy to say that the restaurant has chosen to focus on quality rather than quantity. Everything we ordered was delicious and well prepared. My mom especially liked the Crispy Fried Taro Puffs filled with Seafood. The Steamed Barbecue Pork Buns are about half the size of the run of the mill variety but twice as tasty. The prawns in our stir fried prawns and Chinese vegetables on a bed of egg noodles were cooked to perfection. 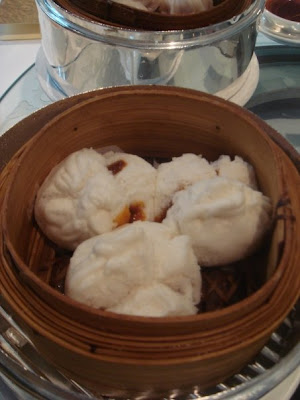 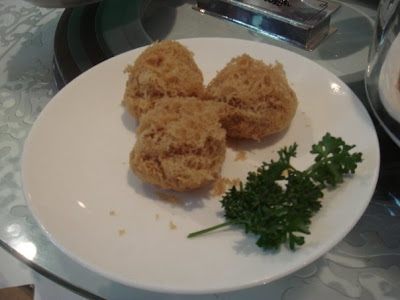 We also ordered 3 different desserts - Baked Sago Pudding with Lotus Paste, Egg White Almond Tea, and Red Bean Cake. They turn out to be all my favourites as I can't decide which one I like best! Hmm... I might just have to come back to try the rest of their dessert menu! 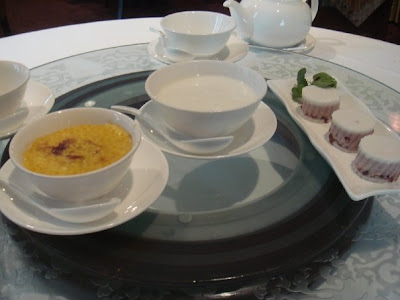 Service was impeccable. We didn't have to refill our teacups ourselves once. The waiters were very attentive yet unobtrusive. For once, I feel the 10% service fee is well justified.

I have chosen wisely... and JC has happily received the mastercard bill.