Chef David Tamlyn serves British fare at The Pawn. This historical building, erected at the end of the 19th century, used to house tenements and a pawn shop. The decor is sober but pleasant.
I didn't know quite what to expect about the food because I haven't had much British food in my life and I still was living with the old stereotypes of "lamb with mint sauce" (I'm sorry). 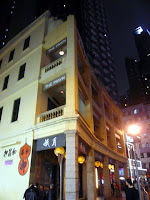 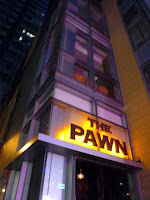 We were pleasantly surprised with The Pawn's food; all the dishes were excellent and nicely executed. Although, 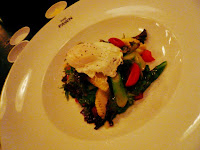 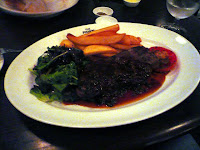 My strip-loin was really tender, cooked right, with a nice, not too gravy/heavy pepper sauce. Very nice. 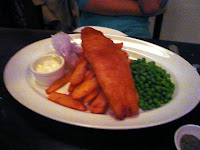 Fish and chips, peas, homemade tartar sauce. May thought there was no way we would go for British food and not have fish & chips. The fish was really good and the batter quite light. 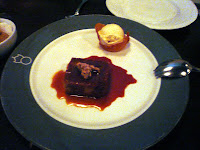 Sticky toffee pudding, toffee sauce, butterscotch ice-cream. It was OK, but at $75, I thought it should have called for something a bit more special.