Bo Innovation is a Michelin starred restaurant, number 97 on the Times world's top 100 restaurants. May and I were very curious. I really didn't know what to expect as Chinese food is all about tradition and 'extreme' Chinese food just sounded a bit scary.

All in all, we were disappointed. It felt like an overly ambitious attempt to do something different while missing the point that taste and layering is what really matters. I mean, I don't care if its molecular or not, if it's going to taste and feel the same on my palate, then it's just fluff. 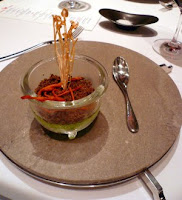 Dead GardenDry ice frozen innoki mushroom on top. Supposed to have mint undertones but we couldn't taste it. The morel, acting as soil were a bit dirt-y tasting. Overall, it looked better than it tasted in our humble opinion. A miss. 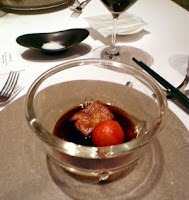 Tomato
the special true-8 Chinese vinegar is not very acidic and quite sweet. Problem is that the piece of foie gras was quite small and the overly sweet vinegar hid almost all of the foie gras taste. However, the idea was good because as the sweetness of the vinegar subsided, the foie gras taste was progressively revealed. An interesting feeling in one's mouth; going from basically the taste of 'flan' to the taste of foie gras. Again, the effect would have worked much better with a more generous portion of foie gras.

Salty egg. My favorite; langoustine was cooked just right (might have been even better without the batter), cauliflower made into risotto was a great idea I thought, and extremely flavourful with the truffles.

Molecular Xiao Long Bao.
Ok, it's molecular, ok, it tastes like the original. But, uh, so what? Isn't molecular supposed to give you a different experience? 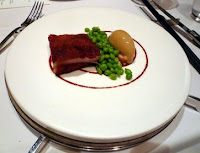 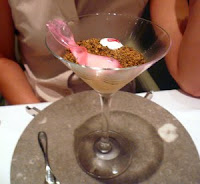 Sex on the beach was a miss as far as I'm concerned; not really subtle but no real appealing flavors. The fake condom/whatever they call it was just a bit gross. 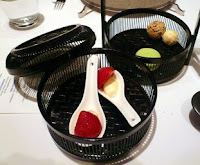 The other two desserts were much better.