Well, after having a great meal at The French Window, we decided to 'milk' the birthday month coupons and try Whisk at the new Hotel Mira in Tsim Sha Tsui.

First, the venue; elegant enough, although things are still being built in the Hotel and it was a bit noisy. The dining room is strangely laid out with some of the details close to the railing overlooking Cuisine Cuisine, the Chinese restaurant downstairs, which are right by the main travel path of all the wait staff, which made us feel a bit like we were sitting in a corridor. Special mention for the ugly carpet (I'm picky about carpeting).

The food itself was very good and here's some of what we had: 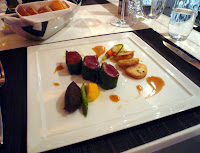 Ok, so, the food was great, compliments to the chefs.

However, where it went wrong is that service was not up to par: the waiter forgot to bring bread, so we asked for it. Didn't say he was sorry, brought the bread, no oil nor butter. Asked again. No apologies. Then, when came time for dessert, we were expecting cake as per the birthday month offer, to which our waiter said "Oh, you got to let us know 48 hours in advance!". "Ah, uh, ok, well then, can you substitute for another dessert?". "Let me talk to my boss... No, no substitution, more champagne perhaps?". Yeah, right, getting us drunk is definitely going to make us forget this bad service...
So, as a final park, our Premier MasterCard entitled us to a 15% discount on the bill, or so we thought. Bill came with a 10% discount. Asked the waiter: "Oh, no, the 15% discount is only at the restaurant downstairs". Ok, that's not what I read on the coupon but since you took it away from me when we came in, I guess I'll just trust you on this.
On our way out, the manager asked whether we liked our experience, to which we replied that food was great but service was bad, and proceeded to explain what happened. He apologized and said they have plenty of cake and if only he had known, he would have substituted the dessert for us. Well, good intention but the meal was over and he offered to have champagne on the house next time around. Well, sounds like they have tons of cheap champagne. Anyhow, how to rebuild trust when it's been broken? You have to react immediately and prove that mistakes made were not intentional. That wasn't done. He promoted the buffet to us; he could have offered 2for1 on the buffet or something like that... anything. Not just promises.

Anyhow, that was the difference between management which knows how to keep customers coming (The French Window) and amateurs (Whisk).
Strangely enough, I believe the parent company is the same. Anyway, that's it for us for Whisk, it's just sad for the kitchen staff; they delivered a great food experience, unfortunately not matched by the people serving it.