One of the characteristics of the Hong Kong food scene is how quickly and suddenly restaurants open and close. Mostly due to the insane rent prices, even busy restaurants will close because they just can't afford their rent. Uno Mas, which was quite good, suffered the rent hike faith.

Papi's is new but who knows how long it will last. We wish it good luck because it is reasonably priced and quite good. Fresh produces make the difference here. Among others, olives that are NOT out of a can. Yay!

----------
Update 2012-04-30: Don't know what happened, we went to Papi again today and the food was just atrocious. We had meatballs that were mushy, mushy octopus, a whole round of mushy food. Not quite sure what to think of that place anymore. 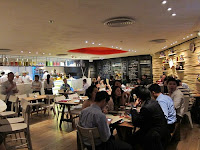 May and I have been together for 13 years, married for 8. We used that opportunity to try Spoon by Alain Ducasse. I had high expectations and Spoon fell somewhat short. While the food was all quite good, it is also quite expensive (HKD $4000 for the two of us, before the Premier card discount of 15%-20%). Tasting menu for May was HKD $1,388 + $688 wine pairing (we didn't think the pairing was all that great) I preferred The French Window which, to me, was a notch better and also less expensive.

I also thought that the service could have been tweaked a little bit (please, don't come ask if we are ready to order if the menus are still open. That's the basic etiquette; open menu, we're still deciding, closed menu, come take our order. Oh, yeah, while we're at it... cutlery lined-up on the plate; we're done. Cutlery resting on the side of the plate, we're still eating)

Views of the harbour are quite amazing.

Sometimes, food is good, could even be great, but the ambiance or service of a restaurant is what makes you say you may not go back.
That is sort of what we experienced at Entourage. I called for reservation but no-one picked-up. I left the booking information and my phone number. The recorded message was stating that we would be called back. They didn't. We showed up and while the restaurant was mostly empty, we were seated next to the other 4 people in the restaurant instead of at a more comfortable spot with banquette seating. May asked to move. The guy said that he didn't really want to seat us there in case some group of 4 would show-up. But, there were plenty of room for a group of 4 pretty much everywhere in the restaurant. May was peeved.
Then the same maitre D' sort of came a few times to ask if we were ready to order, which made us feel rushed. Remember, 4 people in a restaurant that probably seat 40.
Then the music was sort of an eclectic mix of pop not too conducive to eating and more appropriate jazz pieces.
At one point, the staff decided to close the windows, which is fine, but didn't turn down the AC, which made the place really chilly.
It's sad because my main course, I thought, was amazing; the yellow-fin tuna was seared just perfectly, with  nice condiment of tomatoes and peppers. Two big pieces of tune. Really, really great. Just like the finest steak without the guilt! May's steak was OK but suffered from being Australian beef. Ok, we may be prejudiced but sorry, Australian beef doesn't even come close to U.S. or Alberta beef.

Anyhow, I think I may want to go back just for a Tuna hit-and-run but the overall experience at La Marmitte was much better.