Tai Kok Tsui is gentrifying (I never fully understood why gentrification would be a bad thing) and there's a bunch of new restaurants and dessert place that are opening at a fast pace. 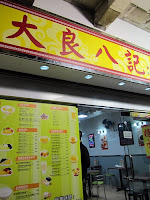 一半一半甜品屋
Fifty Fifty Dessert House
Shop B, G/F, Tai Fu Building, 20 Tai Tsun Street, Tai Kok Tsui
Again here, inexpensive and not bad at all. A notch above Mega Eight.
Chinese and western style desserts. May tells me the coffee was terrible though (better at McDonalds)

Black and White
Unit B&D, 88-102 Ivy Street, Tai Kok Tsui
Certainly pricey, with most dessert being in the $55-$70 range. However, this is "la creme de la creme" of dessert place. Probably some of the best desserts I have had in Hong Kong. I sure hope they attract a following outside the area because I can't imagine the surrounding areas paying the price of a full meal for dessert quite yet. It would be said if they had to move. Wishing them the best. We were certainly happy customers! So, please go!