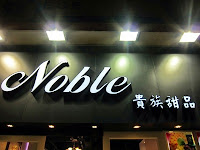 I mentioned it before, Tai Kok Tsui is gentrifying fast and as a result, tons of new restaurants are opening. I was going to write "Noble is the latest in the list" but it is already no longer the case. Since then, at least 3 new eateries have opened their doors. It certainly makes going out for supper a lot more exciting than when we moved to Tai Kok Tsui two and a half years ago. Lots of food blogging to catch up to however.

Anyhow, Noble...
Only desserts there but a wide variety of Chinese and western style sweets. We actually went twice by now and both times, desserts were nice and overall, affordable. Not as "upscale" as Black&White nor as local as Mega Eight (which are both within a 1 minute walk), it provides a happy median not only in price, but also in variety and taste. Tends to get quite busy at night. Recommended.