Thanks to Chen-En, a colleague at work, we were recommended to try Doraya which dishes out fresh Japanese cuisine. Their specialty is tuna, composing at least half of their menu. Quite a good idea as sushi requires the freshest fish possible and the best way to guarantee it is to have a high turnover volume which is often not easy for restaurant offering too much variety.

Doraya is a chain and we tried the recently relocated Tsim Sha Tsui location. Doraya's fish was fresh and right on the mark in terms of taste and texture. Pretty much all the dishes we were served were of the same quality. At $574 for two people, it was also less expensive than many other sushi restaurants. The only negative to this is that the place is crowded; the tables are too close to each other and the staff has trouble navigating between them, which causes accidental bumping which we hate (and the lack of apologies doesn't help either). It's also quite loud so it is a better destination for a meal with friends than for a romantic dinner.

All-in-all, worth a visit to quench that fresh tuna craving! 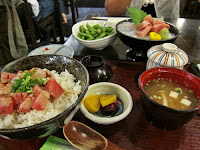 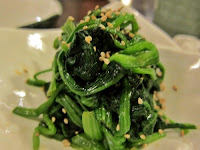 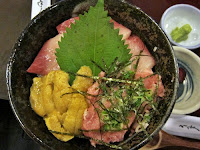 Nice blog! Was wondering if Doraya has any spicy tuna dishes on the menu?

I can't remember. But they probably do.