The concept of gastro-pub had always been vague to me until we went to London; it seemed that all the so-called gastro-pub I went to had nothing to do with being a pub. All of this started to make sense after I saw the formula put to good use in the U.K. The pub we tried in London all pretty much dished very average quality food which is mainly an excuse to get one drinking. The U.K's gastro-pubs are still bona-fide pubs in that they have a bar, serve various kind of beer, spirits and some people will go for that sole purpose, but they also pay special attention to food served, to great effect.

Anchor and Hope was no exception; very fresh produce, elegant yet simple recipes delivering bold taste at a price that is generally below what you'll get at a fancier restaurant. Menu seems to be changing quite frequently; ours had a date on it.

They got me convinced! 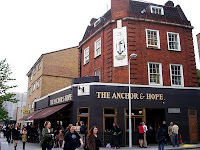