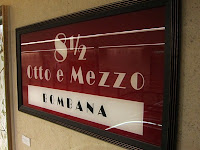 For our 9th wedding anniversary, we booked the ever busy Otto e Mezzo, one of the 4 three Michelin starred restaurants in Hong Kong. As one would expect from such an establishment, the ambiance is great and service impeccable. But, much to our disappointment and as we experienced at L'Atelier Joel Robuchon HK, the food is not at the same level as a 3 Michelin star restaurant in other big cities, be it in New York, Paris or London. It's not that the food is bad but at that price level and at that 3-stars "bragging level", I expect my experience to be surprising and memorable (in a good way). And I demand that elusive quality of food of the great chefs which is the layering of flavours; each bite should bring a succession of flavours teasing your palate, complementing each other perfectly, crashing on one's taste buds in waves of tastes that will make you feel transported to another universe. That's why, for me, eating a good meal is a lot like traveling to a foreign country; there needs to be a sense of discovery.
All of this to say that I have yet to experience this in Hong Kong as I did in London, Chicago, New York, Paris, San-Francisco and Montreal, among others.
Should you go? Well, if you are an investment banker and dropping $3,000 for a meal with a hot date is equivalent to an hour of your work, then sure, you'll have a good meal and won't think about it twice. But if that is the meal that you have once a year, or once every five years, then I would suggest that you wait for that trip to Europe and then splurge on that 3 Michelin star restaurant there. Or, instead, go to non-starred restaurants which will give you 90% of the food experience for 1/3 the price (e.g. La Marmitte, there are others). 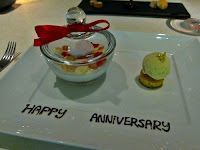